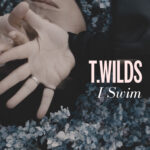 ‘I Swim’ is the first single off the album “Ten Songs” and it speaks to the cycle of inspiration versus misery in creative and everyday life. One of the more up-tempo and melodic songs on the album, the song features Matt Toohey on guitar and Joe Dews on drums.

T. Wilds is a singer/songwriter based in the Blue Mountains in NSW.

The impact of T. Wilds’ voice is immediate and definitive, distinctive, delicate yet powerful, and instantly captivating. Her voice provides the perfect vehicle for her ever-expanding catalogue of songs that are wise and curious, daydreamy and evocative. She is influenced by the beauty of her surroundings and the natural world.

Landing somewhere between the sophisticated soul of Sade, the wistful yearning of Nico, and the country-tinged soul of Gillian Welch, her music continues to evolve into its own genre of delicate indie-folk.

Her stripped-back live performances have seen her impress audiences in support slots for the likes of Cat Power, Wil Oldham, The Books, Kristin Hersch, My Brightest Diamond, Clare Bowditch, and many others.

Previously her inclination to collaborate has seen her work alongside international artists such as Howe Gelb, Tortoise members, and Prefuse 73, but these days she crafts her recordings with fellow Blue Mountains resident Matt Toohey, who adds light and shade with minimal electric guitar atmospherics to accompany the classic simplicity of her acoustic guitar.

‘I Swim’ is out now.  Album “Ten Songs” is out October 2021 through Cheersquad Records & Tapes.