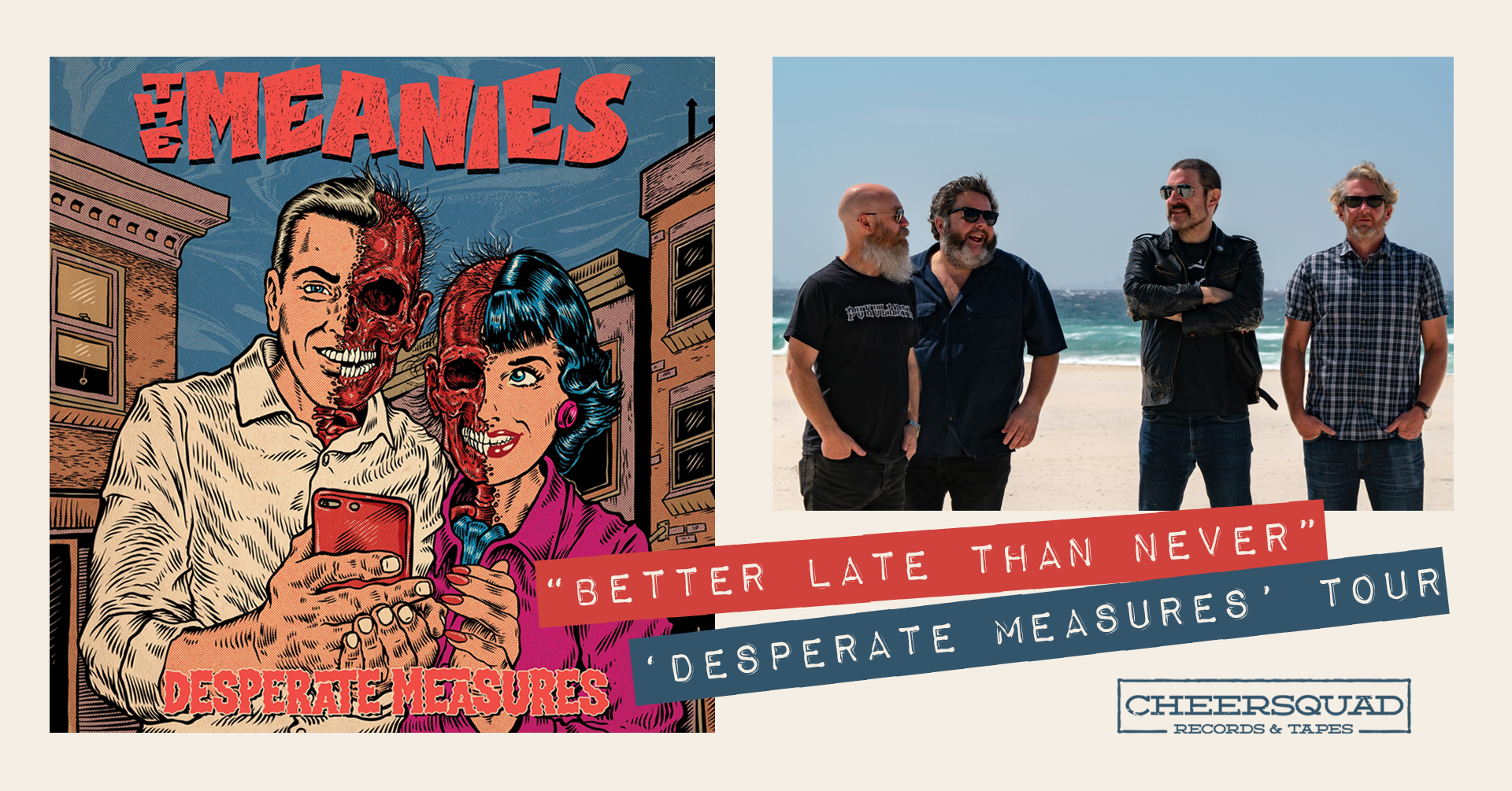 Only in these crazy times might a band tour its new album the year after the year after it was released, but that’s what the Meanies will be doing when they hit the road in February to finally give Desperate Measures a proper live airing. Desperate Measures was released in July 2020, by which time the shit had already hit the fan. Their “Better Late Than Never” DESPERATE MEASURES TOUR was first announced earlier 2021 when things looked like they’d cleared. They got bumped a couple of times, and now they’re on for 2022.

At least the certainty (?!?) of things as they stand now has allowed for more shows to be added. It’s also given Link Meanie – aka Link McLennan – a chance to release the debut album by his new project Bagful of Beez.

The Meanies’ Desperate Measures is a hard, fast and catchy onslaught of hard-hitting Meanies mayhem. It evokes the classic sound that made the band a household name in all the worst houses back in the ’90s, and which has influenced generation after generation of young punks ever since. Their “Better Late Than Never” DESPERATE MEASURES TOUR is gonna be worth the wait.

Desperate Measures is out now on Cheersquad Records and Tapes.

See below for all tour details.

As mentioned above, Melbourne’s lockdowns enabled Link Meanie aka Link McLennan to record an album by his new project Bagful of Beez, and that album Do Androids Dream of Electric Beatles, is also out now on Cheersquad Records & Tapes.

Do Androids Dream of Electric Beatles is a brilliant and eclectic mix of classic pop styles, and the result is the sort of everything-including-the-kitchen-sink approach that studio-enamored pop savants have been known to take ever since Todd Rundgren recorded A Wizard, A True Star. Link recorded the album completely by himself, playing all instruments. He played out solo with a drum machine as Bagful of Beez a couple of times earlier in the year but has just enlisted Even drummer Matt Cotter to ensure a stronger live presence. (Even of course is also the second home of Link’s Meanies bandmate Wally, and Even’s Ash Naylor has also performed with Link in the Meanies on occasion.)

“Link is the Dr Seuss of music. Bending the beautiful, bizarre and brilliant around each other in creations I’m perennially in awe of” – Tim Rogers

“This is the pure sound of a brilliant, crazed, talented savant. I listen to so much of Link’s music with a sense of wonder and joy. But this takes it to another level.” – Bruce Milne (Au-go-go Records)